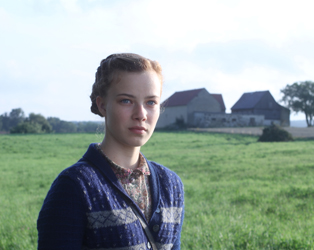 Win a lovely prize in our Lore competition!

It’s taken Australian writer-director Cate Shortland eight years to follow her brilliant debut Somersault, but the unexpected German-language result, Lore, only underlines her status as a talent of rare sensitivity and ambition. Set during the final days of WWII, this adaptation of Rachel Seiffert’s novel The Dark Room is another rites-of-passage story, but what lies ahead for teenage heroine Lore (assured newcomer Saskia Rosendahl) is not just the physical challenge of delivering her four young siblings to their grandma’s house near far-off Hamburg, but the task of surviving when all the certainties drummed into her by fervent Nazi parents are now melting away.

The IFI is delighted to be screening this film until March 14th, and to celebrate its release we have a lovely prize to give away to one lucky winner! Simply answer the question below and you could win a Lore official quad, Lore exhibition stills, and a copy of the novel, The Dark Room, by Rachel Seiffert.

Competition closes at midnight on Sunday 3rd March 2013. The winner will be notified by email shortly after. (See IFI Terms and Conditions regarding prizes and competitions.) Prize courtesy Artificial Eye.