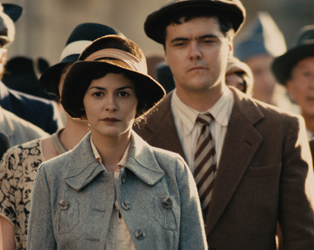 Audrey Tautou shows what a great actress she’s become with a quite mesmerising take on novelist François Mauriac’s confounding anti-heroine in this atmospheric adaptation of Thérèse Desqueyroux, the final film from much-admired director Claude Miller (The Little Thief, A Secret).

To celebrate the release of this stunning film, we have a fantastic prize bundle to give away to one lucky winner! You could win a copy of the Nobel-winner François Mauriac’s 1927 novel Thérèse Desqueyroux (the book from which the film is adapted), a French language DVD bundle (Certified Copy and Elles, both starring Juliette Binoche) and a copy of the official Thérèse Desqueyroux poster!

Simply answer the question below before midnight, Monday June 10th!

Which film launched the international career of Audrey Tautou?

Thérèse Desqueyroux is screening at the IFI until June 27th. BOOK NOW

Competition closes at 12am midnight on Monday, June 10th 2013. The winner will be contacted by email. (See IFI Terms and Conditions regarding prizes and competitions.)