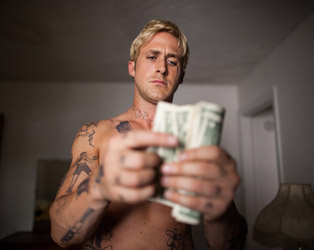 Win a DVD copy of The Place Beyond The Pines from the IFI Film Shop!

After the visceral love story that was Blue Valentine, writer-director Derek Cianfrance shows no lack of ambition in The Place Beyond The Pines, an expansive contemporary saga, engrossingly tracing the longterm ripple-effect of questionable moral decisions. Cianfrance’s work obviously thrives on moments of heightened emotional intensity, and actors seem to love working with him, hence the ever-charismatic Ryan Gosling as a rootless carnival daredevil biker who tries to settle down when he learns he’s the father of waitress Eva Mendes’ child.

To celebrate the release of The Place Beyond The Pines on DVD, we have two copies to give away. To win a DVD, simply answer the question below before midday this Friday 16th August, and the winners will be announced and contacted on Friday afternoon.

Question: Which of these films has Ryan Gosling not starred in?

Competition closes on midday Friday, August 16th 2013. The winners will be contacted by email shortly after. (See IFI Terms and Conditions regarding prizes and competitions.)