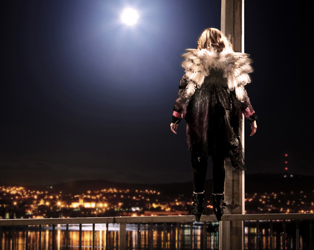 Win a DVD copy of Jump from the IFI Film Shop!

Effectively conveying the carnival feel of a wild New Year’s Eve in Derry, and making atmospheric use of its particular sense of momentum, Jump quickly establishes the relationship at its core between Greta (Nichola Burley) and Pearse (Martin McCann), who meet by chance on a bridge while the rest of the city is wrapped up in revelry. The instant attraction between them however, is thwarted by an unwelcome connection in the form of Greta’s father, one of the city’s most brutal criminals. While the couple attempt to overcome and escape this, Greta’s friends – mirthfully played by Charlene McKenna and Valene Kane – run into dire straits of their own that alter but unite all four lives irrevocably.

To celebrate the DVD release of Jump on Friday September 6th at the IFI Film Shop, we have three copies of the film to give away. To win a copy, just answer the following question by midday on Friday 6th September 2013, and the winners will be announced shortly after.

Question: Which of the following Irish TV series set in a restaurant did Charlene McKenna star in?

Competition closes at midday Friday, September 6th 2013. The winners will be contacted by email shortly after. (See IFI Terms and Conditions regarding prizes and competitions.)