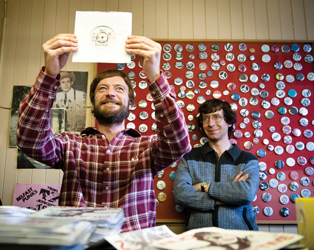 Win a DVD copy of Good Vibrations from the IFI Film Shop!

Beset by sectarian conflict, Belfast in the late 1970s hardly seemed like fertile ground for an onrush of musical energy, but Good Vibrations pays thanks to the unbridled enthusiasm of mover and shaker Terri Hooley, who tirelessly encouraged the local punk scene while raising two fingers in the face of the Troubles. Character actor Richard Dormer seizes the moment with his energetic portrayal of the one-eyed dynamo whose eponymous city centre record shop and indie label gave this ‘Alternative Ulster’ its focus, and delivered The Undertones’ Teenage Kicks into the annals of 45rpm immortality. An uplifting reminder that two chords, a terrace-chant chorus and a gobbet of attitude really could make the world a better place.

To celebrate the DVD release of Good Vibrations, we have two copies of the film to give away. To win a copy, just answer the question below before midday Thursday 22nd August 2013, and the winners will be announced shortly after.

Question: What country is Richard Dormer from?

Competition closes at midday Thursday, August 22nd 2013. The winners will be contacted by email shortly after. (See IFI Terms and Conditions regarding prizes and competitions.)