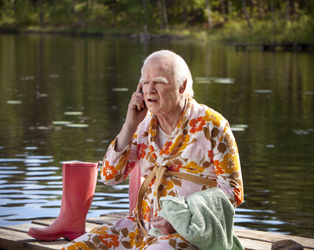 Jonas Jonasson’s bestselling novel retains its picaresque flavour in this film adaptation, which begins with Allan Karlsson (Robert Gustafsson) slipping away from the centenary celebrations being thrown in his honour, and taking to the road with a dubiously acquired suitcase full of cash. Its original owners, a criminal gang, set off in pursuit while themselves being chased by police.

Allan meanwhile, is making friends along the way, and telling them the incredible story of his life; falling somewhere between Forrest Gump, Zelig, and Harry Flashman, he has had a knack for being in the right place at the right time, leading to encounters with world leaders including Stalin, Truman, and Churchill, as well as notable figures such as Robert Oppenheimer. This highly entertaining shaggy dog story breezes along with a fine sense of the absurd and a pleasing undercurrent of black humour.

What is the name of Jonas Jonasson’s second novel?

Competition closes at midnight Sunday, July 6th, 2014. The winners will be contacted by email shortly after. (See IFI Terms and Conditions regarding prizes and competitions.)