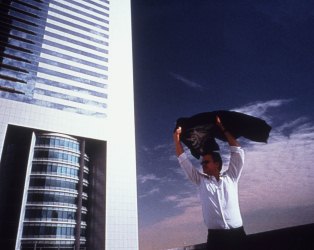 The Irish Film Institute is delighted to partner again with the Irish Architecture Foundation on the return of The Fourth Wall. In a collaborative partnership with the Science Gallery’s ‘Hack the City’ initiative, this year’s event focuses particularly on reinterpretation of the urban environment. The relationship between architecture and cinema, particularly the role served by the city as setting and character, has been well documented. The films in this short programme present the cityscape in refreshing ways that cast it in an entirely new light.

The Fourth Wall continues in August with Dublin Plays Itself, a city walk programme curated by the IFI Irish Film Archive and the IAF, and sponsored by Hack the City.