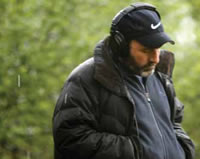 Pat Collins will be interviewed by Derek O’Connor on Tuesday, August 14th at 18.30. This event is FREE but ticketed. Please book your seat when visiting, by emailing the IFI Box Office at boxoffice@irishfilm.ie or by calling 01 679 3477.

Cinema offers a long history of critics turned filmmakers, from the mainstays of the Nouvelle Vague to Wim Wenders and recent IFI visitor Peter Bogdanovich. To this illustrious canon we add Corkonian polymath Pat Collins, who edited the late, lamented Film West magazine, before programming the Galway Film Fleadh for a couple of memorable seasons, then producing his first remarkable documentary, Michael Hartnett – A Necklace Of Wrens in 1999. In the years since, Collins has been producing consistently stunning docs – over two dozen of them – at a nigh-upon-breathless rate. His eclectic filmography offers portraits of artists ranging from director Abbas Kiarostami to cartographer and author Tim Robinson, psycho-geographical examinations of Tory Island and his beloved Cork, plus experimental mood pieces such as Loch Dearg and the extraordinary Pilgrim (both 2008).

Pat Collins could be described as a cinematic landscape artist of sorts, possessing a deft ability to capture texture, mood, and emotion, along with the confidence to let his films (and their subjects) truly breathe. Viewed together, these idiosyncratic, always fascinating screenworks offer a unique snapshot of Ireland at the turn of the 21st century, with a particular focus on rural living and those quiet rebels with – much like the filmmaker himself – a truly unique way of seeing. (Introduction and notes on individual films by Derek O’Connor.)

This brief season of Collins’ work coincides with the release of his remarkable first fiction feature, Silence, screening at the IFI until August 9th.