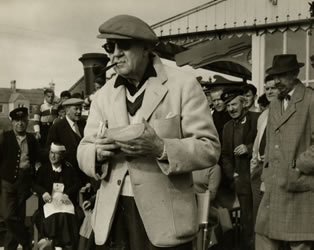 Inspired by the tremendous response to last year’s Revisiting The Quiet Man programme (co-curated by the IFI and Gabriel Byrne and presented at New York’s Museum of Modern Art), the IFI embarked upon a John Ford Film Repatriation Project to acquire pristine copies of Ford’s Irish-themed films for preservation and presentation in the IFI Irish Film Archive. We are proud to present the first fruits of this project, which is supported by Culture Ireland and the American Ireland Fund.

The name on the credits is John Ford, but he had many names, formal and informal, to mark his shifting identities. He began his career as Jack Ford; to his co-workers he was ‘Pappy’ or ‘Coach’; but as Maureen O’Hara recalled, “Pappy always loved calling himself by the Gaelic version of his birth name, Sean Aloysius Kilmartin O’Feeney.” Many other Hollywood directors had Irish roots but none took them with as deep a seriousness as he did, or made as much of them in life or in filmmaking. He was born in Maine in 1894 as John Martin Feeney, to Irish immigrant parents from Co. Galway – father from Spiddal, mother from the Aran Islands – and he loved to return, first on exploratory visits and then to make films.

This season showcases ‘Irish Ford’: four films set mainly or wholly in Ireland but shot in Hollywood, and three for which he used Irish locations. Together they project a wonderful blend of a real historical Ireland with what his major biographer Joseph McBride has termed a ‘mythopoeic’ one. Of his four Academy Awards for Best Director – still a record – two were for The Informer and The Quiet Man, the other two for films whose stories offered very clear Irish parallels: The Grapes of Wrath (dispossessed farmers) and How Green Was My Valley (set in Wales, with Dubliner Sara Allgood as the mother of the family). Ireland was not a marginal self-indulgence in Ford’s career, but a central source of inspiration.