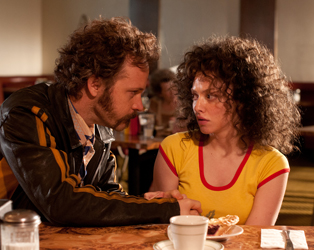 As a documentary filmmaker, Rob Epstein has rewritten US historiography by placing sex and sexual identity at its centre, rather than wars, expansionism, race or economic development.  Most crucially, he reclaimed homosexual achievement, whether that of publicly visible, heroic males like Harvey Milk and Allen Ginsberg, or the unseen gay personnel in, and viewers of, classic Hollywood, who inserted subversive content in their films, or read reactionary narratives ‘against the grain’.

But if males, even homosexual males in a homophobic society, can be active makers of history, Epstein’s first solo female heroine seems passive – discovered, renamed, abused, pimped, raped, gang-raped, and financially exploited by men.  Even at the moment of Linda Lovelace’s greatest cultural triumph – skin flick Deep Throat entering mainstream culture, making her a media sensation – her achievement is a joke, her body, her skills, her name the subjects of sniggering jokes by aging males on TV, such as Johnny Carson and Bob Hope.

Had Linda’s story ended with Deep Throat, or the final escape from her vicious husband (an escape ultimately facilitated by yet more scary middle-aged men), hers would have been a sad, sympathetic, not particularly inspiring narrative.  What makes Linda a true Epstein hero(ine) is that she fights back.  She names and shames her abusers, and by implication the snickering mainstream ‘intelligentsia’ that for a few moments got off on Deep Throat.  And she did this by writing a book, by becoming – like Milk the orator and Ginsberg the poet – an artist.  Her fight back is like that of the contributors to The Celluloid Closet : each responds to a bogus, noxious, widely accepted media construct of sexual identity with a resounding NO.

The Ginsberg film Howl was the transitional film between Epstein’s documentary work and Lovelace, his first fully blown feature.  Howl was a documentary in that it reproduced audio, visual and textual records; it was fictional in that Epstein (and co-director Jeffrey Friedman) reconstructed those records in live action monologues, dramatic sequences and by the use of animation.  James Franco acting as Allen Ginsberg as he recites ‘Howl’ or gives a press interview may be fiction, but is only quantitatively different from, say, Franco reading an old letter on a Ken Burns documentary.

Howl’s multi-stranded approach is replaced in Lovelace by a more cohesive fictional illusion.  Even archival footage of Linda’s appearance on the Donahue talk show digitally replaces the historical Linda with the actress playing her, Amanda Seyfried.  The only other factual intrusion occurs at the end of the film when the usual ‘what happened next’ titles are followed, movingly, by a photograph of the real life Linda.

The film begins with an audio-visual overture – images of camera, film screens and audiences warning us to be aware of the mediated nature of what we are about to see; fragmented images of Linda taking a bath are overlaid with a montage of voices, asking for the ‘real’ Linda Lovelace.  The impression is of a woman without her own voice, defined by her body, the subject of others’ discourse, her ‘self’ created by cinema and the media.

‘Six years later’ flashes on the screen, a harrowed Linda seems to be tied to a chair; she is taking a polygraph test.  She is about to write an exposé of her experiences, and her publishers want to make sure she is telling the truth.  The first story is told again, but this time the gaps created by what had seemed to be conventional elisions between scenes are filled in.  Linda’s honeymoon sex is a violent rape; before suggesting Deep Throat, Chuck pimps Linda to out-of-town salesmen; she is forced to film Deep Throat at gun point; he brandishes the gun again when Linda refuses to pleasure a room full of Hollywood executives.

The two most distressing scenes are not, however, those of Chuck’s physical abuse, but dramatise encounters with people who should be supportive but fail to help.  The first is an astonishing sequence where Linda seeks refuge from Chuck with her parents.  Her mother, the exemplary Catholic who offloaded Linda’s baby, refuses to take her in, telling her she must go back to her husband, and fulfil her vow to forever obey him.  She can never divorce, despite Linda telling her mother that Chuck abuses her.  Sharon Stone’s icy righteousness disguised as maternal wisdom is the high point in a major performance.  (Whether or not the conception of her character is sexist – by contrast with the empathetic and emotionally sustaining father – is another matter).

It would be misleading to imply that the first half of the film is the breezy Official Story of Linda Lovelace as presented to the world in the early 1970s, and the second a revision of that history rewritten by its victim.  The first half does acknowledge Chuck’s violence – his outburst on being released from jail, or the bruises Linda displays to her co-star Dolly.  Nevertheless, the second half seems to unquestioningly vindicate Linda’s account – despite the polyphony of the overture, her account is privileged as the true one, the corrective; there is no Rashomon-style counterpoint of witness statements from Chuck or the other protagonists.  It appears to be enough that the polygraph machine attests to her truthfulness.

For some the spectacle of female victimhood in a film written and directed by men will be problematic.  Others might cite Linda’s Catholic background and read her ‘Ordeal’ as a ‘Passion’, a spiritual journey through sin and suffering leading to redemption.  Even more, taking their cue from The Celluloid Closet, might place the story of a beautiful, resourceful woman betrayed by a handsome heel in the tradition of the 1940s women’s picture, and praise Lovelace as a Mildred Pierce of the spurious ‘sexual liberation’ era.

This review is the 2014 winner of the annual Pete Walsh Critical Writing Award. More information