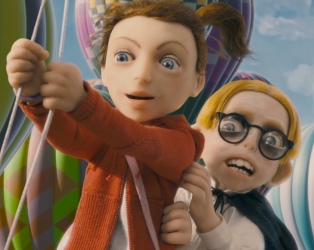 The Magic Piano is a lovely heart-warming short film although it is incredibly sad at times. The main character is a little girl who lives with her father in Poland. One day, a man comes and forces them to leave their home. They go to a relative’s house and the man leaves the girl there while he goes to look for work. After a while, the girl receives a postcard telling her that he is in London. She is really sad and her relationship with her little cousin isn’t the best. She goes off in a huff and sits in the courtyard. There she finds a magic piano…

This film is a silent puppet animation and the soundtrack is made up of piano pieces by Chopin. I loved the music as it really set the mood at different parts of the film.

This film is a short animation set in Venice in the 1920s. It is quite a whacky movie, partly because all the people’s heads are either gramophones or other devices such as telephones and the gramophone headed people use records to show their emotion or to tell another person something, e.g. ‘I’m sorry I’m late’.  It is about a boy who has travelled to Venice from Japan to become a composer. As much as he and his oboe-playing cat try, he can’t get a certain piece right. There is a bad guy called Count Telefino who is trying to sabotage his competitors. The film is quite confusing at the start but it has some really funny pieces and is very entertaining overall.

The Magic Piano and The Missing Key

These are two animated films. The Magic Piano was about a girl and a boy and a piano. When the girl’s tear falls onto one of the keys of the piano the piano came alive. The piano started growing wings and started flying. I really enjoyed The Magic Piano. I love the way the puppets were made and I loved the music too.

The Missing Key is about people with strange heads. One of them was trying to come up with a new tune on the piano.  I enjoyed The Missing Key. I thought the heads were very weird. The heads were made of record players, telephones and tape recorders. The music was very good. I liked the way they used tapes instead of mouths for the babies.

My favourite was The Magic Piano because the flying piano was very cool.

Wasabi is a young musician living in Venice.  He and his cat Jacuzzi are competing in the abacus school competition.  But his cranky music teacher isn’t very happy with him as he is always late to class.  Count Telefino wants to steal Wasabi’s music so he can win the competition. So when Count Telefino sends a person to destroy Wasabi’s piano and throw away all his music sheets he is totally unprepared. Though the characters are excellent, music is the main character.  It perfectly illustrated the characters and their actions for children who would like an interesting introduction to music.  This a must see.

The Magic Piano is a great and magical story for young children to enjoy.  This short story animation is all silent and the sound-scape influences the atmosphere greatly.  In this story a father is forced to leave his daughter behind when he goes away to work.  Soon the plot deepens as the girl and an eccentric, annoying boy fly away in the magic piano.  I would recommend this movie for ages 6+.

This astounding and hilarious film, The Missing Key, is set in a world where instead of people having heads they have a type of machine such as a telephone, gramophone or a telegraph machine.

In this story a young piano player and his cat enter the music competition, Abacus Scroll.  Mr. Telefino is also participating in the competition and does various things to try to win.

I would recommend the film to lovers of slapstick comedy from ages 6 upwards.

The Magic Piano is a sad film but with a touch of beauty. When an inspector comes in and takes the keys of their house, the little girl’s dad finds another job far away. She really misses him, but how will she get to him?

The music was outstanding. I would give a thumbs up to that. The animation was amazing, almost as good as Nick Park’s animation! The reason why I didn’t rate it five stars is because there was a scene that was a copy of Up (2009). Yet I think it deserves four stars.

The Missing Key is set in Venice, Italy. The characters, instead of heads, have gramophones! A Japanese student is studying music for a competition but another student is trying to sabotage all the others.

The music is really good at the end. I give it four stars. I give the animation five stars.