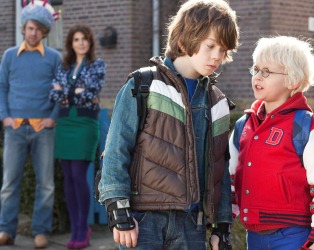 Alfie, the little Werewolf is a fantastic, emotional film.  The soundscape helps a lot in setting the emotion and feeling.  The plot in this movie follows a small seven year old who finds he is a werewolf.  He goes on rampages every full moon.  He then starts asking himself questions.  Will his parents accept him?  Who are his real parents?  I would advice this movie to age seven +.

Alfie is a little boy who turns into a werewolf.  There is one careless mistake.  At one stage there was a full moon and Alfie didn’t change.  The subtitles were easy to read.  It is for under tens but adults might enjoy it too.  The family-comedy is very good so it deserves four stars.

Alfie, The Little Werewolf is a funny yet sometimes a little scary family film.  It’s about a boy who, on his seventh birthday, wakes up to find himself turning into a werewolf.  Although it is in Dutch, it’s subtitled, and if you’re not that fast at reading, there is a reader there who will read out loud to you!  I found this film very amusing and would love to see it again.  Even though it was subtitled, I didn’t think that affected the fact that it’s such a great film.

I thought the costumes were brilliant, and I loved how they made Alfie change from a boy to a werewolf.

I rated this film four stars out of five, losing a star because I felt they could have had more special effects. When Alfie is a wolf I think his costume could have more detail. When he is standing beside the other “real” wolves in the zoo, he looks like a teddy bear!  The age I would give for this film is six years and over because there are some parts that might give younger viewers a bit of a fright.  Other than that, this film is perfect for the family.