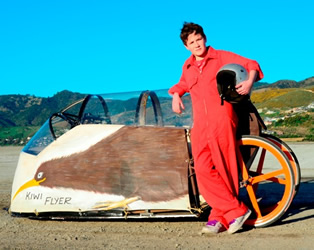 Kiwi Flyer is a fun, family adventure with a little bit of suspense. Ben Walker is a teenager who enters a go-kart derby.  His Dad entered it when he was a child,
but never won, even though he was the favourite.  Ben wants to win for himself and for his Dad.  But there is cheating in the race.

The film was really exciting because you were guessing what was going to happen until the very end.  The plot was great and creativity from the director was really good.

This was my favourite film in the whole festival.

The Kiwi Flyer is about a boy called Ben who lives in a town in New Zealand. Every year, since Ben’s great Grandad was alive, the town has a race-cart competition. Ben’s dad always came second when he was a kid. One year, Ben decided to enter so he and his dad started to make a cart, but then something tragic happened. Ben couldn’t compete in the race. He didn’t want to ever compete in the race again! But, years later, something changed Ben’s mind and he decided to enter, for his dad. He made a cart called the Kiwi Flyer. I think this film is very tense and exciting, and it’s hilarious. I really enjoyed it very much. It’s in English, unlike other films in the festival. I rated it 5 stars out of 5 because it is brilliant and I would really love to see it again! The age I put for it is 8 years and over because there is quite a sad part. But other than that this is an excellent and very funny family film and great for everyone to enjoy!