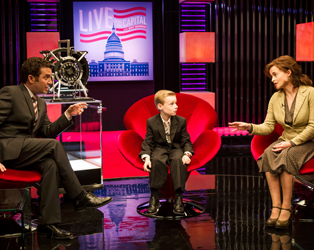 WIN A PRIZE TO CELEBRATE THE YOUNG AND PRODIGIOUS T.S. SPIVET (3D) AT THE IFI!

To celebrate the release of the film The Young and Prodigious T.S. Spivet (3D) directed by Jean-Pierre Jeunet, opening EXCLUSIVELY at the IFI on  Friday, June 13th, we have three fantastic prize bundles to give away! Each bundle includes: Jeunet’s previous works, Amélie and Micmacs on DVD, Reif Larsen’s book on which the film is based, a T.S. Spivet bookmark and a poster!

T.S. Spivet is a clever, precocious and intuitive 10-year-old living on the family’s ranch in Montana, with an imagination and intelligence that give him the notion to escape his meagre circumstances. His parents appear mismatched; dad is a cowboy throwback, while mom is a distracted entomologist. His timid brother and diva of a sister give him further cause for grief. On taking a call from the Smithsonian, who are under the impression he is a grown-up inventor of a perpetual motion machine, he leaves home for Washington, intent on accepting a prize being offered to him. His decision sets him on course for a brilliant adventure.

Tickets for this film are on sale now. Book Here.

Which of these films was directed by Jean-Pierre Jeunet?

Prize courtesy of Entertainment One. Competition closes at midnight Sunday, June 15th, 2014. The winners will be contacted by email shortly after. (See IFI Terms and Conditions regarding prizes and competitions.)