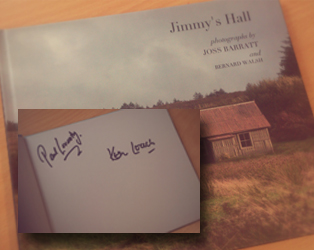 CELEBRATING JIMMY’S HALL: WIN THIS SIGNED BOOK OF PHOTOGRAPHY FROM THE FILM!

Celebrating the release of  the film Jimmy’s Hall directed by Ken Loach, we have a stunning book of photographs from the movie to give away. The book is signed by the director Ken Loach and screenwriter Paul Laverty!

Based on the true story of Jimmy Gralton, the only Irishman deported from his own country as an “illegal alien”, Ken Loach’s latest feature focuses on the dance hall Gralton opened in rural Leitrim at a time when Ireland was on the brink of Civil War. A place where young people could come to learn, to argue, and to dream, but above all to dance and have fun, quickly came to the attention of the Church and politicians who forced Jimmy to flee and the hall to close.

Returning from the U.S. a decade later, Jimmy vows to live the quiet life. However, as he reintegrates into the community and sees the poverty, boredom, and growing cultural oppression, he decides to reopen the abandoned and empty hall, regardless of the opposition and consequences.

Which screenwriter collaborated with Ken Loach in the making of the film The Wind That Shakes the Barley?

Competition closes at midnight on Wednesday, June 11th, 2014. The winner will be contacted by email. (See IFI Terms and Conditions regarding prizes and competitions.)