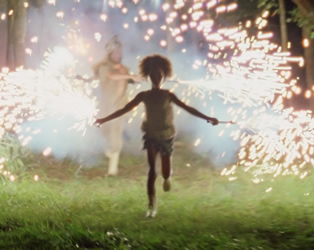 Beasts of the Southern Wild Competition

One of the most talked about films of the year, Behn Zeitlin’s Beasts of the Southern Wild is the highly acclaimed festival favourite of 2012. Hushpuppy, a 6-year-old played with warrior spirit by Quvenzhane Wallis, lives with her father Wink in ‘The Bathtub’, a southern Delta community at the edge of the world. When Wink becomes sick, nature flies out of alignment and Hushpuppy must somehow learn to survive… (5 stars, The Irish Times).

To celebrate the opening of Beasts of the Southern Wild at the IFI from October 19th, we are delighted to offer goody bags (which include DVDs of the films Submarine and Spirited Away) to 3 lucky winners! Nice!

Simply answer the question below before midnight, Monday 22nd October 2012. Need a hint?

Prize courtesy of Studiocanal. Competition closes at midnight, Monday 22nd October 2012. The 3 winners will be chosen at random from the correct answers on 23rd October and notified soon after.

Beasts of the Southern Wild runs at the IFI until November 1st. Watch the trailer: