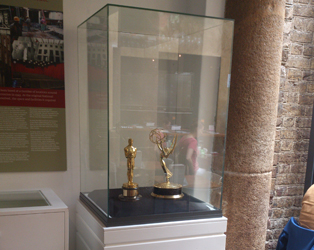 In 1992 renowned Set Designer Josie MacAvin (1919- 2005) presented the IFI Irish Film Archive with her Academy Award and Emmy statuettes, along with a collection of books, photographs and sketches that she had collected throughout her distinguished career. Ms MacAvin was nominated twice by the Academy of Motion Picture Arts and Sciences for her work on Tom Jones (1963) and The Spy Who Came In From the Cold (1965) and eventually won the coveted award for Out Of Africa (1985) directed by Sydney Pollock and starring Meryl Streep and Robert Redford.

In 1995 she also won the television equivalent of the Oscar – the Emmy – for her work on the mini- series Scarlett, which was a loose sequel to Margaret Mitchell’s novel Gone With The Wind. She is the only Irish person to have been honoured with both awards, which is testament to her skill and versatility as a designer for both the big and small screen.

The IFI Irish Film Archive is delighted to display these two statuettes as part of IFI20: Celebrating 20 Years in Temple Bar in the IFI foyer.