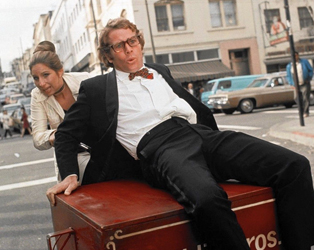 This screening will be introduced by Festival Director of the Audi Dublin International Film Festival Gráinne Humphreys.

Fresh from the success of The Last Picture Show, Warner Bros asked Peter Bogdanovich to direct something with
Barbra Streisand, so he took his idea of ‘a professor and a dizzy dame’ to some high-calibre writers. The result is this
gag-filled, whirlwind of a comedy, filled with chaos and one-liners.

Four identical plaid bags are checked in to a hotel: one contains top-secret documents, another precious jewels, another belongs to freeloader Judy Maxwell (Streisand), and the fourth to Prof. Bannister (Ryan O’Neal) with whom Judy falls in love. Doors are banged, a theft takes place, a fiancé is kidnapped, and a San Francisco chase ensues in this homage to Bringing up Baby.