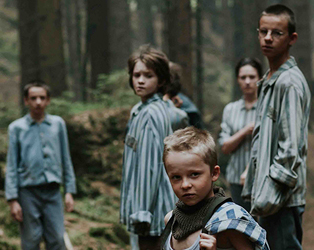 Following their liberation from a concentration camp by Soviet soldiers, a group of eight children must adapt to their newfound freedom and learn to fend for themselves in a countryside that holds its own dangers. At first, they find safe haven in a dilapidated mansion and its sole occupant. After her sudden death, the group dynamic shifts as the roles of parents are taken on by Hanka (Sonia Mietielica) and Hanys (Nicolas Przygoda), while Władek (Kamil Polnisiak) looks on, his envy festering. The greatest threat to their safety is the guard dogs released from the camp, who, though now feral, still recognise the children’s uniforms as targets. Pinned down in the house, supplies dwindling, they must once again fight to survive.

Winner of numerous festival awards, Werewolf is a thematically rich depiction of maintaining one’s humanity in the face of unimaginable horrors.