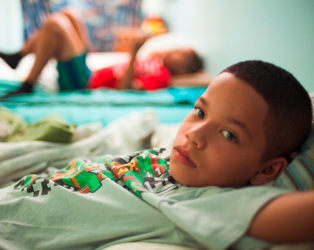 This film was released on Friday 14th June 2019 and is no longer screening.

Jeremiah Zagar’s debut feature, an adaptation of Justin Torres’s semi-autobiographical novel, is a vivid
recreation of childhood as seen through the eyes of Jonah (Evan Rosado), who celebrates his tenth birthday in the course of the film.

Inseparable from his two elder brothers, Joel and Manny, the bond between the three has been forged by the rollercoaster nature of their parents’ relationship. Ma (Sheila Vand) and Paps (Raúl Castillo) hide none of this from their children, neither the violence he inflicts on her in the bad times, nor the honeymoon of intimacy that follows their inevitable rapprochements. As his brothers approach their teenage years and assume a minatory swagger, Jonah feels isolated, a condition exacerbated by his nascent sexuality.

Filled with moments of startling creativity, this is a lyrical study of how one’s present is shaped by one’s past.