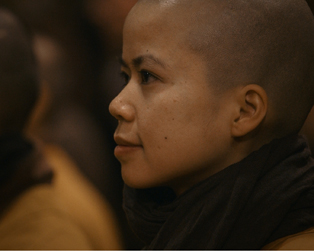 This film was released 5th January 2018, and is no longer screening.

A documentary portrait of the renowned Zen Buddhist master Thich Nhat Hanh, who has been credited with introducing the practice of mindfulness to the West, Walk With Me offers a rare opportunity to observe the lives and routines of the monks and nuns who live at Plum Village, the rural monastic community that Nhat Hanh established in 1982 in southwestern France. A recent stroke has curtailed some of the ninety-year-old’s activities yet he remains a powerful force with an international presence.

Directors Marc J. Francis and Max Pugh avoid extensive backstory in favour of a more immediate, observational approach that lends the film an immersive quality. A further contemplative layer is added through Benedict Cumberbatch’s narration of passages from Fragrant Palm Leaves, a collection of Nhat Hanh’s journal writings from his first years of exile from his native Vietnam.