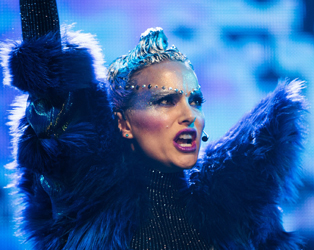 Actor-turned-director Brady Corbet delivers on the promise of his debut feature, The Childhood of a Leader (2015), with another boldly cinematic take on the genesis of an iconic figure, this time charting a young prodigy’s dizzying ascension to global pop superstardom.

Teenager Celeste (Raffey Cassidy) is one of the few survivors of a 1999 school shooting. She writes a tribute song to the victims and sings it at a memorial, her powerful performance capturing the hearts of the nation and the cynical attentions of manager Jude Law. Flash-forward to 2017 where Celeste, now played with blistering intensity by Natalie Portman, is a scandal-ridden, drug-addled pop sensation heading for a public nervous breakdown.

With narration by Willem Dafoe, original songs by Sia and a menacing score by the late Scott Walker, Vox Lux establishes Corbet as a director of vision.