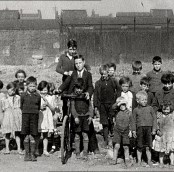 VOTE for the IFI Archive Jukebox!

The Irish Film Institute is Ireland’s cultural institution for film and home to the IFI Irish Film Archive which preserves Ireland’s rich film history from as far back as 1897. We want to create an on-site jukebox which will give free public access to the Archive’s collections. A digital jukebox, users can access historical footage from around the country with the touch of a button!

VOTE for the IFI Archive Jukebox on the Arthur Guinness ProjectsWebsite— you can vote once a day until 23rd August, 2013!

About the Project
The IFI Irish Film Archive collection spans the end of the 20th century to the present day. It provides a vivid representation of Ireland’s past and is historically, socially and culturally invaluable providing a unique visual record of the development of modern Ireland. Restored and preserved in climate controlled vaults in Temple Bar, the collections contain newsreels, feature films, home movies, travelogues, advertisements and documentaries, amongst others.

This award would go towards curating a quality programme for viewers to choose from, clearing copyright, constructing a booth and developing a user-friendly digital interface for all to use. The IFI is part-funded by the state in order to preserve our national film culture, but with this additional funding, we can ensure that our film heritage is accessible to all. This is just the beginning of a long term ambition to develop jukeboxes in every county in Ireland, and then later to give online access to the collections enabling people worldwide, to access our national film collections.

**VOTE for the IFI Archive Jukebox on the Arthur Guinness Projects Website  — you can vote once a day until August 23rd!**