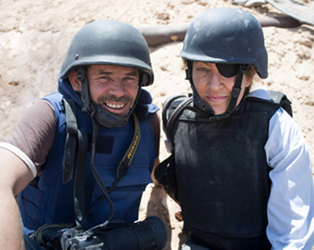 Christopher Martin’s extraordinary documentary focuses on her relationship with photographer Paul Conroy, a similarly crusading figure who recounts their fateful 2012 mission to Syria to awaken the western media to the horrors of Assad’s barbaric treatment of his own people. Smuggled illegally across the Syrian border by rebel forces, Colvin and Conroy experience first-hand the daily bombardment of civilian sites in the devastated city of Homs.

Conroy’s detailed reminiscences are underpinned by astonishingly vivid footage he captured during their ordeal, some of which is appropriately shocking.