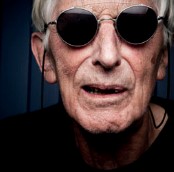 “My whole philosophy in life is based on doubt. But it’s a very open doubt because it’s asking myself why not?” – children’s author, illustrator, ballad collector and creator of sadomasochistic erotica, Tomi Ungerer was our special guest at the IFI on Friday, December 13th, attending an opening night screening of Far Out Isn’t Far Enough: The Tomi Ungerer Story, a feature documentary about his artistic work and personal journey from Alsace, via New York, to Bandon, West Cork.

Far Out Isn’t Far Enough: Tomi Ungerer Story is continuing at the IFI until January 2nd. BOOK NOW on 016793477.

Listen back to Tomi Ungerer in conversation with IFI Head of Programming Michael Hayden: