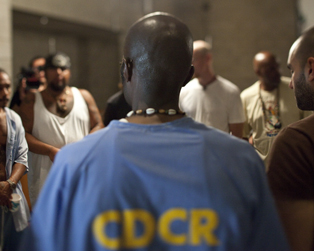 The Work is an intimate new documentary which steps beyond the walls of Folsom State Prison in California to give viewers a new perspective on this infamous institution.

Limited to a single room inside the prison, The Work explores a special four-day therapy session with groups of male prisoners. It’s a stark look at the real people behind serious crimes and the process of rehabilitation which may see them rejoin society again one day.

The IFI is delighted to be opening The Work from September 8th and we’re even more excited to be able to welcome the filmmakers for a special preview of the film. This screening will take place on Tuesday September 5th at 20.30, with Jairus McLeary and Rob Allbee joining us after the film.

Jairus McLeary is a court videographer and filmmaker. The Work is his first documentary, which he co-directed with Gethin Aldous. He spent several years gaining the trust of the convicts in order to film.

Robert S. Allbee has been the Executive Director/Founder of the Inside Circle Foundation, a not for profit prison outreach program, since 1997. Prior to that he volunteered as a creative writing instructor through the Arts-in-Corrections program at Folsom Prison and had extensive experience facilitating men’s groups. He is an Executive Producer on The Work.

Tickets for this special preview screening are available now online here, or at the IFI Box Office.

The Work opens at the IFI from Friday September 8th 2017.