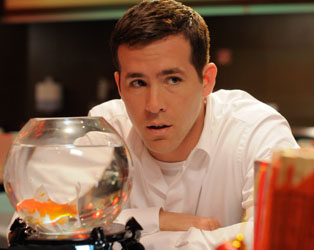 Screening from Friday, March 20th is The Voices, a new dark comedy from Marjane Satrapi (Persepolis), who finds a rich seam of humour in some very dark material, a difficult balance successfully maintained through the combination of her confident direction, Michael R. Perry’s defiantly odd screenplay, and a committed cast. To celebrate its release, we have ten limited-edition film t-shirts to give-away, courtesy of our friends Eclipse Pictures!

When the shy, but sweet and likeable Jerry (Ryan Reynolds, in a brilliantly judged performance) is enlisted to help in the planning of a party at his workplace, the lure of spending time with co-worker and crush Fiona (Gemma Arterton) outweighs his trepidation to the extent that he eventually musters up the courage to ask her out.

Jerry is advised on these and other matters by his loyal, friendly dog, and malicious, evil cat – or rather, believes he is, since Jerry has decided to no longer take medication for his mental illness. Guided by voices, Jerry’s life quickly takes a turn for the worse.

What critics are saying:

“Satrapi has created a twisted and funny film that is reminiscent of The Coen Brothers” ★★★★ Movies.ie

“Some nice supporting work from the ever ace Anna Kendrick and a great Ryan Reynolds complement some brave, wonderfully absurd moments.” ★★★★ Entertainment.ie

The Voices is now showing at the IFI & tickets are on sale. BOOK NOW!

Celebrating the release of The Voices at the IFI, we’re offering ten limited-edition T-shirts from the film! Simply enter your details below and we will select ten lucky winners on Wednesday, March 25th 2015. Good luck!