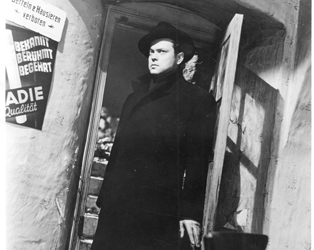 Cited by the British Film Institute as the greatest British film ever made, and affording Orson Welles with arguably his most memorable screen appearance beyond Citizen Kane, Carol Reed’s masterful adaptation of Graham Greene’s script makes a welcome return to cinema screens for its 70th anniversary.

American pulp novelist Holly Martins (Joseph Cotten) travels to Allied-occupied Vienna to take on a job offered to him by his old school friend, Harry Lime. Yet he arrives to find Lime has been declared dead days before. Confronted with conflicting stories about the man he knew, Martins’s suspicions are raised and he sets out to get find out the truth behind his friend’s death, though nothing is what it seems.

Beyond the great performances and its precious script, Reed’s groundbreaking propensity for angled shots, the atmospheric expressionist cinematography of Robert Krasker and Anton Karas’s unforgettable score contribute to making The Third Man the enduring wonder it is.