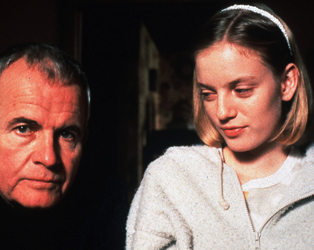 This screening will be introduced by Stephen Boylan, IFI Press and Marketing Manager.

Adapted from the novel by Russell Banks, Atom Egoyan’s Oscar-nominated drama centres on the small Canadian town of Sam Dent as it tries to recover from an unthinkable tragedy.

When a local school bus hits a patch of ice one morning and crashes, fourteen children are killed. Mitchell Stevens (Ian Holm), an outof- town lawyer dealing with family issues of his own, arrives in the town to convince its grieving parents to take part in a lawsuit against the local authorities and the bus company. To win, he must convince survivors of the crash to testify, including Sarah Polley’s Nicole, who soon has the measure of Sam Dent’s newest inhabitant.

Featuring two riveting performances from Polley and Holm, and a haunting score from Mychael Danna, The Sweet Hereafter is an unforgettably moving look at loss, grief and the nature of blame.