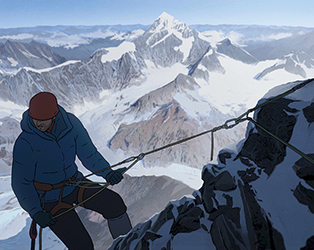 Patrick Imbert’s brilliant, immersive animated film is adapted from the eponymous Japanese Manga by Jirô Taniguchi and Baku Yumemakura. Could it be that George Mallory and Andrew Irvine were in fact the first men to reach the peak of Everest in 8 June 1924, before their mysterious disappearance? In a chance encounter in Kathmandu, Japanese mountain photo reporter Fukamachi discovers that Mallory’s camera has been found by Habu Jôji, himself a famous and now elusive mountaineer. On a quest to solve the mystery, this is the start of Fukamachi’s investigation which becomes an extraordinary emotional and spiritual journey.

Director’s note: Breathtakingly inventive 2D animation! Such highly detailed realism – the emotion of painting and the precision of photography – brings the characters to life!