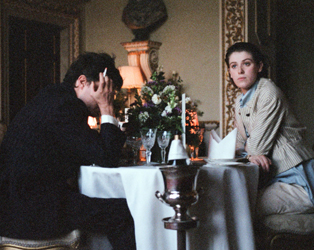 Tickets for The Souvenir Part II are available here.

For her autobiographical fourth feature, British director Joanna Hogg marries the exacting nature of her brilliant early films – Unrelated, Archipelago – with the formal experimentation of Exhibition (2015), to winning effect. The Souvenir is an entirely convincing, emotionally honest examination of a toxic relationship which ultimately proved formative to the director’s oeuvre.

Honor Swinton-Byrne plays Julie, a film school student prepping a graduation film about the shipyards of Sunderland, a working-class milieu far removed from her own privileged upbringing. At a dinner party she meets Anthony (Tom Burke), an urbane, pinstripe-clad Foreign Office worker, who exerts a compelling air of worldly-wise sophistication. Blinded to warning signs that are clear to her mother (played by Tilda Swinton, Swinton-Byrne’s own mother), Julie enters into a turbulent romance with Anthony, who is revealed to be a complex and damaged individual.