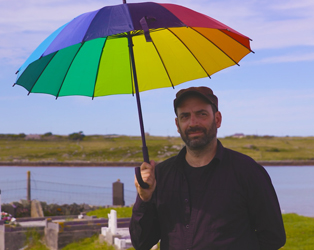 This film screened on 17th December 2019 and was  followed by a Q&A with Niall McCann and Adrian Crowley, hosted by Matthew Nolan, and a short musical performance.

Can a film ever truly reflect who you are? Irish singer/songwriter Adrian Crowley becomes a ghost visiting his own life, imagining what a documentary about
himself would be like, blurring the lines between documentary and fiction, reality and imagination, subject and director.

Director Niall McCann further explores the playful territory he mapped out in his first two films, Art Will Save The World and Lost In France, reimagining the parameters of the musical film form and the nature of documentary itself. The film is filled with the sonorous vocals and beautiful melodies of Crowley, snapshots of family life and lush landscapes, and includes stunning performances from Radie Peat of Lankum, Brigid Mae Power, the Crash Ensemble, and words from writer Kevin Barry.