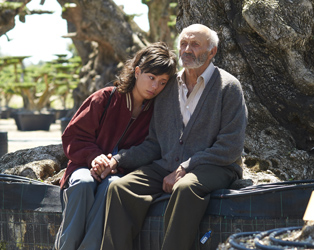 20-year-old Alma works on a chicken farm in the economically deprived Castellón region of Spain. She has a deep emotional bond with her beloved grandfather, who has not spoken since her father sold the family’s ancient olive tree. Alma believes the only way he can be saved is if they find the tree, replanted somewhere in Europe, and bring it back to its rightful spot in the family grove.

Persuading her uncle ‘Artichoke’, her workmate and friends to join her, they set off on an adventure to track it down. The quest to return the tree becomes a spiritual journey that will restore hope to their family and the region.

Following their 2010 collaboration Even the Rain, director Icíar Bollaín and screenwriter Paul Laverty reunite once again to tell this poignant story of a vibrant, determined young woman who refuses to let the past die.