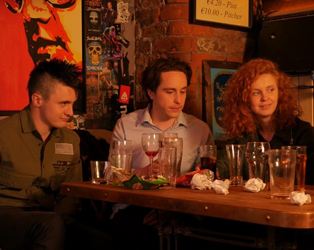 The screening will be followed by a Q&A with director Chiara Viale and Gary Boyle of Young Parkinson’s Ireland.

Adrian (Cilléin McEvoy) is a talented pianist with a promising career ahead of him. Playing music is the only thing he lives for until his world falls apart when he is diagnosed with Young Onset Parkinson’s Disease. Afraid of the implications of the illness and of failing the expectations of his family, Adrian runs away from home, destination Dublin.  He finds a room in a shared apartment with punk band members Will (Jack Fenton), David (Patrick O’Brien) and Jodie (Martina Babisova), known collectively as The Cellmates.  Adrian gradually bonds with them as their rebellious lifestyle and punchy music provides lively distraction from his troubles.

This feature debut from Chiara Viale, produced in association with Young Parkinson’s Ireland, presents a relatively unknown condition against a warm, funny and uplifting narrative.