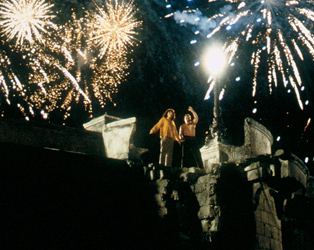 The screening will be introduced by freelance writer and IFI projectionist Paul Markey.

One of the most polarising of contemporary French directors, the third feature from Leos Carax (Pola X, 1999; Holy Motors, 2012) remains his most successful to date, a film that is, according to critic Roger Ebert, “both glorious and goofy, inspiring affection and exasperation in nearly equal measure”.

At heart, it’s a deliriously romantic love story between vagrants Michèle (Juliette Binoche) and Alex (regular Carax collaborator Denis Lavant), who make their home on the titular bridge while it is closed for repairs. He is a street performer and alcoholic, she a painter who is slowly losing her sight. The film had a notoriously difficult production and distribution history, beset by accidents, injuries, and spectacularly spiralling costs. What resulted is something unique and wonderful, filled with visual poetry and gleeful abandon.