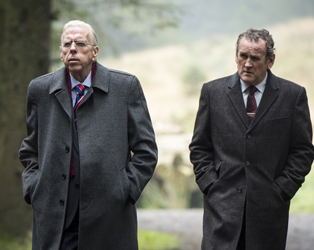 Set against the backdrop of the negotiations that would ultimately result in the St. Andrew’s Agreement of 2006, The Journey is, as it is careful to make clear, a highly fictionalised account of the origin of the political and personal relationship between the Reverend Doctor Ian Paisley and the late Martin McGuinness.

When Paisley insists on returning to Belfast to celebrate his fiftieth wedding anniversary, McGuinness is equally insistent on accompanying him, reasoning that there is safety in opponents travelling together. On the drive to the airport, the gregarious, chatty McGuinness (Colm Meaney) makes overtures, all of which are ignored by the seemingly intransigent and diametrically opposed Paisley (Timothy Spall). However, as their travels continue, a chink of hope appears. Watching the two actors play off each other is a real treat in this engaging and unexpectedly sweet film.