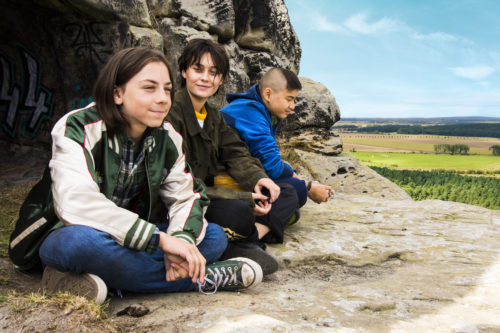 IFI Press Release September 26th, 2017 – The Irish Film Institute today launches its exciting 2017/2018 Schools Programme with highlights that include a screening of Dunkirk on 70mm, Emer Reynolds’s compelling documentary The Farthest, a new Short Course in Film for Junior Cycle students, and special events that will allow students to meet and engage with Irish filmmakers.

The Irish Film Institute’s 2017/2018 schools education programme is its most comprehensive to date. Once again the programme has been designed to encompass the full academic year, making it easier for schools and teachers to plan their visits and related materials well in advance. As in previous years, the programme has been designed to align closely with subject curricula and to offer opportunities for students to access a wide range of interesting and exciting cinema.

You can view the full programme below, or download here.

Speaking at the launch, Head of IFI Education, Alicia McGivern commented, ‘Our biggest programme yet has been a joy and a challenge to put together. Its range is affirmation of the sheer potential for film in education and we are sure teachers and schools will find something of interest and relevance.’

Senior Cycle films offered this year include Brooklyn, An Inconvenient Sequel, with an introduction by climate change lecturer, writer and activist Dr. Cara Augustenborg, and an encore screening of Shakespeare’s Globe: King Lear. For Business Studies students, there will be a screening of The Founder starring Michael Keaton while, for History scholars, Tomi Reichental and director Gerry Gregg will participate in a Q&A after a screening of Condemned to Remember in association with the Holocaust Education Trust, Ireland.

In addition to Dunkirk on 70mm, the Transition Year films on offer this year include the Irish film highlights Handsome Devil and Revolutions, and a focus on women and space with two very different screenings: Emer Reynolds will present her NASA Voyager documentary, The Farthest, while Hidden Figures which will be introduced by Dr. Niamh Shaw, Irish engineer, scientist and performer. There will also be look at music as key for self-expression and survival with two screenings, Emo: The Musical and Patti Cake$.

The new Modern Foreign Languages (MFL) specification for Junior Cycle acknowledges the role that film and media can play in promoting foreign language learning. To support the new specification, the programme will feature Zip and Zap and the Marble Gang for students of Spanish, Italo for those studying Italian, French drama Fanny’s Journey, and The Wild Soccer Bunch for students of German, all suitable for 1st Year.

Senior Cycle films in French, German and Spanish will tour Ireland at various locations and dates throughout the year. The tours rely on the support of arts centres around the country, and this year’s programme also includes an extensive tour to Cork Film Festival for both schools and family screenings.

The Primary programme is a mix of the old and new, with features such as Disney Pixar’s new film, COCO, plus a big hit from the IFI Family Festival earlier this year, Australian drama Red Dog: True Blue. For Seachtain na Gaeilge, we are showing the Irish language version of Cartoon Saloon’s The Secret of Kells.

In addition to the extensive screenings programme, there are a number of exciting workshops and resources available to teachers and students, including a Careers Day in association with Bord Scannán na hÉireann/the Irish Film Board will which take place on March 21st. With the film industry in Ireland going from strength to strength, and animation companies increasingly productive, Careers Day will offer students the chance to hear from some of the people who work in the Irish film industry.

Students of the new Junior Cycle Art specification will have the opportunity to interpret visual messages conveyed through film, art and architecture via our collaboration with the National Gallery of Ireland (NGI).  Through a screening of Studio Ghibli’s The Red Turtle at the IFI on December 6th and a tour of the NGI, they will be invited to question the works seen as well as respond to the spaces in which they are exhibited.

For more details and to download a full IFI Education 2017/2018 Programme, please visit www.ifi.ie/learn. For more information and booking, please contact Dee or Richard on 01 679 5744 or email schools@irishfilm.ie.

For more information, please contact Stephen Boylan at the IFI Press Office on 01 679 5744 or email sboylan@irishfilm.ie.