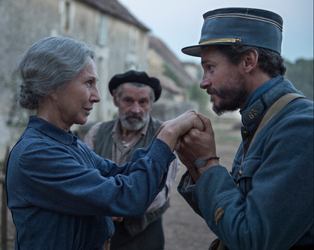 EXCLUSIVELY AT IFI – This film will close on Thursday, September 6th.

The year is 1915. As World War I rages throughout Europe, the women of Pardier Farm, under the guidance of matriarch Hortense (Nathalie Baye), must grapple with the arduous workload while the men are at the front. Help arrives when the bank in the nearby village sends them 20-year-old labourer Francine (impressive newcomer Iris Bry) instead of the loan they sought to modernise their outmoded equipment. As well as doing her share of the ploughing, reaping and milking, Francine will also prove to be a surprising catalyst for change for the entire household.

Adapted from the 1924 novel by Ernest Pérochon, Beauvois’s film pays tribute to the women of the home front, depicting in lush, painterly compositions the working rituals and seasonal rhythms of farming life in a bucolic idyll unspoilt by the ongoing war.