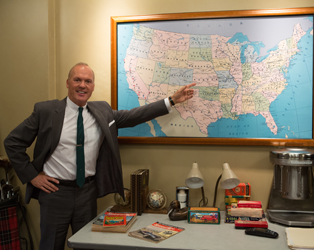 Frustrated travelling salesman Ray Kroc (Michael Keaton) criss-crosses 1950s America selling a series of underwhelming products that have failed to bring him the success he believes is richly deserved.

On receiving an unusual order from a Californian restaurant, he is intrigued enough to visit the venue, where he meets the brothers McDonald, Dick (Nick Offerman) and Mac (John Carroll Lynch), whose revolutionary service model has made for genuinely fast food. Seeing this as his big chance, Ray talks the brothers into franchising their methods, laying the groundwork for the monolithic McDonald’s Corporation of today.

The Founder is a particularly acidic satire of the American Dream, in which success is obtained at any cost by the extraordinarily venal Kroc, driven by greed and desperation, and utterly without compassion or remorse for those betrayed and destroyed when the end justifies the means.

The Founder is also our Feast Your Eyes screening for February, with a special deal for a ticket to the screening + a meal. Find out more here.