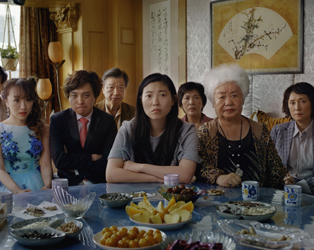 This film was released on Friday 20th September 2019 and is no longer screening.

Lulu Wang’s bittersweet and semi-autobiographical comedy-drama, ‘based on an actual lie’, follows a family’s attempts to keep secret from its matriarch that she is in the final stages of a terminal illness. Chinese-American Billi (Awkwafina), an aspiring writer living in Brooklyn, maintains a close relationship with her grandmother (Shuzhen Zhao), or Nai-Nai, who still lives in China. When Nai-Nai receives a grim medical prognosis, the information is shared with everyone but her, in accordance with Chinese culture, and a plan made in which a cousin’s wedding will be used to mask the excuse to gather together with her one last time. Awkwafina, following two vivacious, scene-stealing turns in 2018’s Ocean’s 8 and Crazy Rich Asians, here gives a more low-key and textured performance indicative of a fine dramatic talent in this funny and touching story of family.