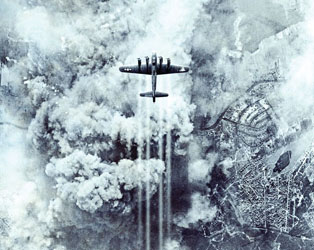 The Cold Blue is a new feature-length film, digitally restored, constructed from the material of 34 reels of raw, colour, footage shot during bombing missions in Germany by famed director William Wyler.

This extraordinary, never-before-seen colour footage puts you 30,000 feet over Nazi Germany, battling killer flak, enemy fighters, and minus 60-degree temperatures. All the odds were stacked against returning home alive. This footage allows the audience to fly alongside the last surviving heroes who flew, who fought and who risked their lives.

The Cold Blue screens in a special presentation on July 4th 2019 at 18.30 at the IFI, including a restored Nazi newsreel which shows the true damage done by the German forces to these aircraft and a featurette which delves into the process of bringing the film to the big screen.

We had the chance to sit chat to The Cold Blue director Erik Nelson recently about his towering new documentary. He talks about finding the outtake footage, the restoration, his debt to Christopher Nolan’s Dunkirk and the message of the film. Click below to watch it.