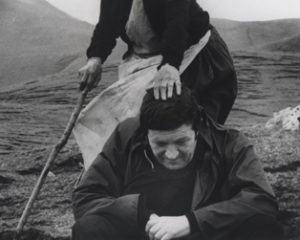 This screening will be introduced by composer Roger Doyle.

A love story is revealed through conversations between an elderly bishop (Donal McCann) and a younger priest in a ‘retreat’ house catering for members of religious orders. The bishop, a returned missionary, violated the laws of the Catholic Church when, as a young curate on a remote island, he had an affair with his housekeeper (Maggie Fegan), the tragic outcome of which profoundly changed his beliefs.

In what he has described as a homage to the purity of early cinema, Quinn employs black and white sequences (from an earlier imagining of the story, 1987’s Budawanny), silent inter-titles, and rugged Clare Island landscapes to create a minimalist backdrop to the powerful narrative.

This screening will be introduced by composer Roger Doyle whose spare & haunting music perfectly underscores the bleakly compelling narrative.

Brian Lally’s The Curious Works of Roger Doyle will screen as part of the IFI Documentary Festival on Thursday 27th at 20.20.