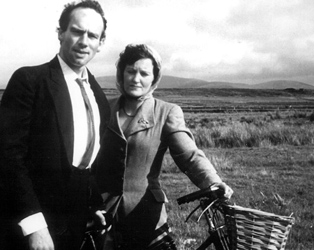 In this quintessential Irish rural drama, screening as part of the St Patrick’s Festival, Bridie (Brenda Fricker), a
lonely farmer’s daughter, goes to the country ballroom where as a young girl she danced and dreamed of a happy
marriage. Now, surrounded by younger, livelier women, she decides that she has suffered the indignities of spinsterhood long enough and vows that tonight will be her last bid to find a husband. But the eligible men have all emigrated or are already spoken for and loneliness threatens to drive her into the arms of drunken Bowser Egan (John Kavanagh).

This is a rare chance to see Pat O’Connor’s film of William Trevor’s short story (set in Leitrim but filmed in Mayo)
– a perfectly observed evocation of the desolation and despair of Irish country life in the 1950s. Fricker, outstanding as a woman stoically resigned to her fate, is joined by a fine cast including Cyril Cusack, Ingrid Craigie, Mick Lally and Niall TóibÍn.