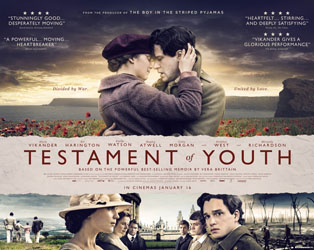 Celebrating Testament of Youth the new film from director James Kent opening Friday, January 16th at the IFI, we have a copy of Vera Brittain’s book Testament Of Youth courtesy of our friends at Lionsgate Films and a pair of tickets to the preview & satellite Q&A screening of the film on January 12th, to give away to three lucky winners!

As she sees the men around her go off to fight, she is determined to make her own contribution and signs on as a nurse, where she bears witness to the desperate state those fighting men return in.Testament of Youth serves as an unflinching depiction of the horrors of the war and an acknowledgement of the vital role women played in it.

Vera Brittain is played by which upcoming actress in Testament of Youth?

Competition closes at midnight on Sunday, January 11th, 2015. The winners will be contacted by email shortly after. (See IFI Terms and Conditions regarding prizes and competitions.)