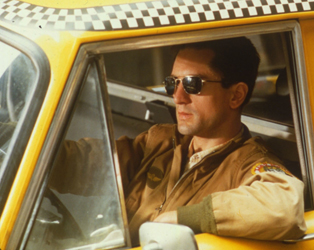 To prepare for his role as paranoid and volatile former U.S. marine Travis Bickle, Robert De Niro listened compulsively to recordings of the diaries of Arthur Bremer, who shot presidential candidate George Wallace and three bystanders in 1972, and who also served as an influence on Paul Schrader in the writing of the script.

The three-dimensional portrayal of Bickle’s alienation and aggression is strengthened by Scorsese’s stark vision of New York after the Vietnam War, a city drawn as sleazy, hostile and corrupt. Exploited by all of this is Jodie Foster’s Iris, a child prostitute with whom Travis becomes fixated after his dalliance with Betsy, a coy political campaign volunteer played by Cybill Shepherd, amounts to nothing. After obtaining an array of guns and ammunition, Travis shaves his head and goes out to wreak havoc, the results of which provide for one of cinema’s most provocative and richly ambiguous endings.