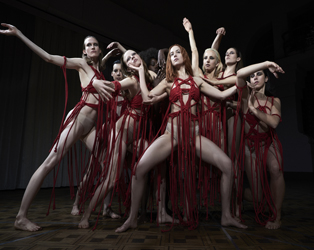 This film was released on 16th November 2018, and is no longer screening.

Director Luca Guadagnino’s (Call Me By Your Name) self-proclaimed homage to fellow Italian Dario Argento’s seminal giallo sees American Susie Bannion (Dakota Johnson) arriving in 1977 Berlin to audition for a prestigious dance academy run by the exacting Madame Blanc (Tilda Swinton, in the latest of a series of collaborations with the director that began with 1999’s The Protagonists).

Having been accepted into the fold, Susie quickly rises through the ranks, becoming lead dancer in the troupe’s signature piece. This draws her into the power struggle behind the scenes and the future of the witches’ coven that operates clandestinely behind the respectable façade of the organisation.

Although Guadagnino has updated the source material to form a dense exploration of contemporary issues, his film retains the sense of dread that permeated Argento’s original, and builds to a suitably Grand Guignol finale.