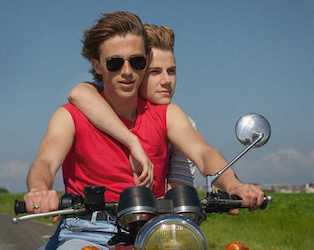 Sixteen-year-old Alex (Félix Lefebvre) is idling his way through a long hot summer, postponing decisions about his future – whether he joins the workforce or commits to his burgeoning talent as a writer. While out sailing, he capsizes and is rescued by eighteen-year-old David (Benjamin Voisin). Sparks fly and the two boys are soon inseparable on the beaches and dancefloors of sun-kissed Normandy, their all-consuming passion underscored by a soundtrack of classic ‘80s pop. Increasingly infatuated, Alex grows jealous of David, who views himself as a free spirit, unwilling to be tied down. Furthermore, as voiceover tells us at the beginning, nothing is quite as it appears. Summer of ‘85, an adaptation of the British 1982 YA novel Dance on my Grave by Aidan Chambers, is an unabashedly queer, hotblooded and hormone-driven film, and as such represents a welcome return by François Ozon to the late ‘90s films that made his name.