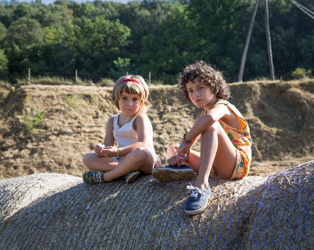 This film was released 20th July 2018, and is no longer screening.

In the tradition of films such as Carlos Saura’s Cría Cuervos (1976) and Jacques Doillon’s Ponette (1996), this debut feature from Carla Simón, based on her own childhood experiences, is a delicate and moving portrait of a child in the throes of inarticulate grief.

Following the death of her mother from causes subtly alluded to, six-year-old Frida (Laia Artigas) relocates from Barcelona to rural Catalonia, where she will live with her Uncle Esteve (David Verdaguer), Aunt Marga (Bruna Cusí), and their three-year old daughter Anna (Paula Robles). Taken away from everything familiar to her, Frida must adapt to her new surroundings and find a place in her new family. While this usually manifests as loneliness and confusion, she sometimes lashes out at those around her.

The naturalistic performances Simón elicits from the two children are astonishing in this understated yet powerful film.