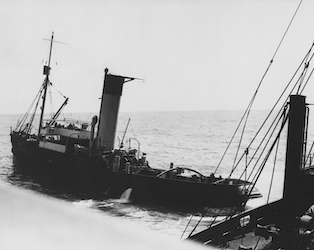 André Laurent (Jean Gabin), captain of a tugboat, is husband to the frail Yvonne, who suffers from a heart complaint. One stormy night, a wedding party is interrupted by an SOS, and a rescue operation ensues during which André meets the beautiful Catherine (Michèle Morgan). Based on the novel by Roger Vercel with dialogue by Jacques Prévert, this lyrical melodrama began shooting in France in 1939 as war broke out. Released in 1941, it was eventually banned as Gabin had joined the Free French Forces. Groundbreaking in its modernity, the film contains complex and compelling staged storm scenes, filled with dramatic tension.