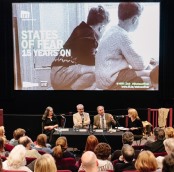 To mark the 15th anniversary of the broadcast of States of Fear, last Saturday, May 24th, the Mary Raftery Journalism Fund in association with the IFI and RTÉ presented a day of screenings and discussions.

Industrial School System. Through survivor testimony and state archives, this episode reveals the vast network of industrial schools which existed in Ireland throughout the 20th century where tens of thousands of children were imprisoned and where many were physically and sexually abused. A panel discussion, chaired by Mary Wilson, examined the impact of States of Fear – on those who participated in it and on the nation who watched it. She was joined by Patsy McGarry (The Irish Times), Catriona Crowe (National Archives of Ireland), and Colm O’Gorman (founder of One in Four, CEO of Amnesty Ireland).

How will you tell my story? Telling people’s stories lies at the heart of every film and drama, but what responsibilities go with telling the stories of personal experience? Is documentary rather than drama, a fairer way of representing an individual’s story? A panel discussion, illustrated with clips from selected documentaries and dramas, was chaired by Fiach MacConghail (director, Abbey Theatre) with Paul Maguire (editor, RTÉ Investigations Unit), Anna Rodgers (independent filmmaker), Sheila O’Connor (Patient Focus), and Roddy Doyle (writer).

States of Fear: How Will You Tell My Story? Panel Discussion by Irishfilminstitute on Mixcloud